State Representative Craig Fishbein (R-90) today joined his House and Senate Republican colleagues and decried a slew of new, and increased, taxes on grocery store foods and prepared meals passed in the Democrat state budget that takes effect on October 1, 2019.

“Despite promises to the contrary, Democrats passed, and the Governor signed into law, a budget that continues to bleed Connecticut residents dry with hundreds of small tax and fee increases on everything from cookies to wine,” Rep. Fishbein said. “People talk about how in the old days a dime would get you a cup of coffee, pretty soon that dime won’t even cover the cost of the tax!”

This week, the Connecticut Department of Revenue Services (DRS) released a statement clarifying the long list of restaurant meals and food items the Democrat-approved 7.35% tax will be applied to, including dozens of products that have not previously been taxed. DRS also clarified that the total 7.35% tax rate will be effective in grocery stores, “which previously taxed meals in a different manner than other eating establishments.”
The new taxes apply to prepared meals like sandwiches, deli salads, pizza, and wraps, but also to small packages of snacks, cookies, bagels, small servings of ice cream, meal replacement bars, and dozens of other items. The taxes also apply to fountain drinks and any beverage sold with a taxable “meal.”

Substantial public outcry caused Democrats to publicly back away from their initial plans to tax grocery store foods, however, they essentially found a way to do so by implementing this additional tax. 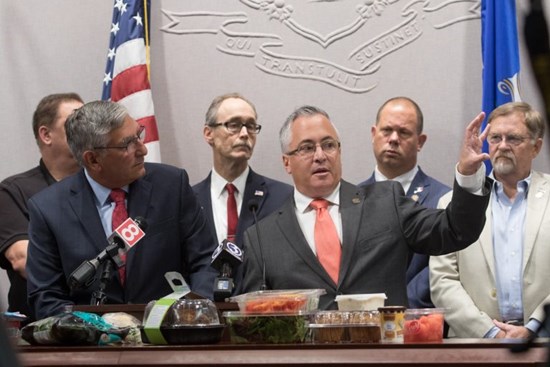 “These increases may not seem like a big deal but these taxes add up to large amounts over time and that money comes out of every pocket, including those who are struggling to pay bills and can least afford another increase on needed day-to-day items like food,” Rep. Fishbein said. “Likewise, families that are pressed for time and running between work, school and extracurricular activities will now have to pay even more if they stop to grab a pre-cooked rotisserie chicken at the grocery store, or into a local restaurant for a meal.”

According to DRS, in addition to many beverages, examples of “Meals” that will be taxed at 7.35% in eating establishments and grocery stores includes, but is not limited to, sandwiches, grinders, and wraps; popsicles, ice cream cones; salads sold at salad bars; macaroni and potato salads; donuts, muffins, rolls, bagels, pastries and cookies; pies or cakes by the slice; chips, popcorn, kettle corn, nuts, trail mix, crackers, snack cakes, or other snack foods; pizza, whole or by the slice; cooked chicken sold by the piece, buckets of chicken and whole cooked chickens; hot dogs served on a bun or heated; all beverages provided with the sale of a taxable meal; hot buffet foods; cooked to order food; any other snack foods kept warm for purchase, and more.