ENDORSED BY THE CHESHIRE HERALD NEWSPAPER! 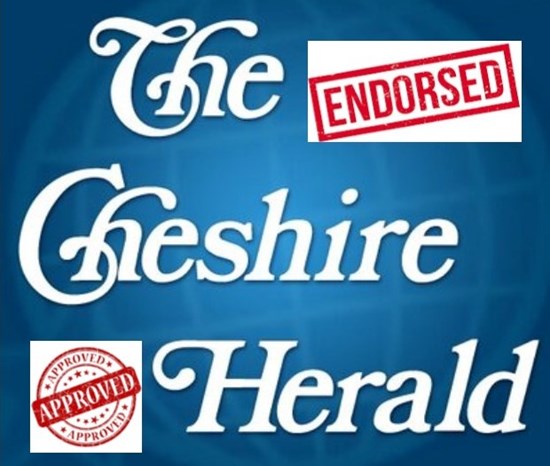 THE CHESHIRE HERALD ENDORSES CRAIG FISHBEIN FOR A SECOND TERM.

Perhaps no local politician has been more true to his word than Fishbein, who ran as a no-nonsense candidate two years ago, promising to stand against almost all government spending and unnecessary regulations. During his term, he’s secured a reputation as a leader who takes a practical approach to issues and is unswayed by the emotions of the moment.
By and large, we believe this to be the attitude more politicians should take.

Fishbein’s experience as a business owner allows him to speak plainly about the effects of complicated government policy— specifically on the unforeseen consequences of government intervention. Fishbein doesn’t just look at what the bill predicts will happen but, rather, what the likely reaction to it will be in the real world—so often overlooked by politicians at every level.

We also commend Fishbein for speaking out against a rather common procedure, practiced by both political parties, of naming potential bills in such a way as to almost shame people into voting for them. For instance, bills with sweet-sounding names such as, “An Act To Save Puppies From Burning Buildings,” don’t always have very much to do with puppies or burning buildings. By attaching such wording, it ensures that a certain segment of the General Assembly will vote in favor, just to avoid being labeled a person who “hates puppies.”

Fishbein has gone to great lengths to explain why he’s voted against such legislation, and while one can disagree with him on the merits, his instinct to look at the whole bill and judge it based on practical application will likely lead to more right decisions than wrong ones.

His opponent Dan Fontaine is a newcomer and we applaud someone so young—36—for wanting to get involved. The tone and tenor of our politics has a nasty habit of driving good people out of public service, so it is encouraging to see someone who wants to enter it.
Yet, we simply disagree on a fundamental level with Fontaine’s political philosophy, whether applied at the state or federal level, and while Fontaine may be new to politics, the ideas he has championed seem as old as the profession itself.

Fontaine seems to believe that Connecticut’s problems can mostly be solved by a “tax the rich” strategy. According to Fontaine’s telling, the wealthiest in Connecticut aren’t paying their fair share and, thus, the tax burden has been placed on the middle class. Yet, according to a recent article in

The Atlantic, for years the 0.02 percent of the wealthiest individuals in the state—many NEWSPAPERof whom work in the volatile finance sector—have accounted for 30 percent of the income taxes paid. That hardly seems like a “fair share” problem.

And how does raising taxes on the wealthy help a state that is experiencing a mass exodus of both businesses and residents? Those in the best position to leave Connecticut are its richest citizens, and they all but assuredly will do so if politicians signal that what lies ahead are more taxes and less freedom to earn and create and grow.

Fontaine seems genuine in his belief that the state can solve much of its problems with more progressive tax policies, but it seems to us that part of Connecticut’s problems stem from too much, not too little, of that very philosophy.